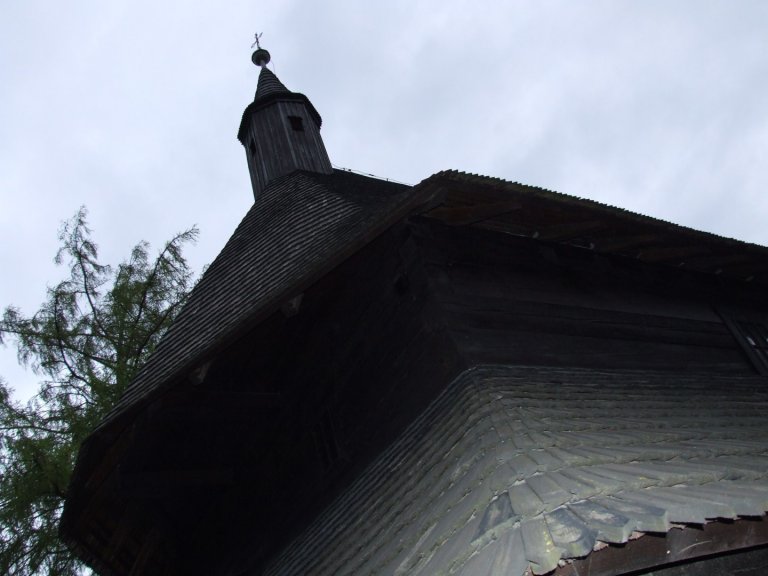 The oldest preserved monumental architecture in Tvrdošín is the Gothic wooden Roman-Catholic All Saints Church. Its origins date back to the second half of the 15th century and it was rebuilt in Renaissance style in the 17th century.

There is a legend often told about the snow which came down here on the 24th of June (at John Day) – this event was considered as a miracle by the local inhabitants. Not only the legend is interesting but also the fact that originally the church was built without a single metal nail. Today, however, the situation is different.

The temple presents a lot of symbols on its walls. On the ceiling, we can admire a starry sky with the moon which symbolizes the crucifixion of Christ. The walls present the paintings of the Apostles. The Renaissance paintings date back to the late 17th century. Our attention is also drawn to the panelled ceiling consisting of 49 ornamented roses, out of which each is different.

The original gothic altar with a painting of Bemoaning the Death of Christ was moved in 1919 to Hungarian National Museum. The contemporary Baroque altar from the 18th century (originally built for a different church) has the painting of All Saints. The composition is complemented with lime wood sculptures with beautiful details.

The church was awarded a bronze prize by Europa Nostra in 1994 (the wall plaque can be seen above the southern entrance) and, as the National Cultural Monument, the church was included in the list of European cultural heritage.

The church is open to visiting and the masses are celebrated here once a year on the All Saints Day. The church is surrounded by the cemetery, where you can find the gravestones dating back to the end of the 19th century as well as the contemporary ones.

The church seems really impressive and the view from the hill surrounding the town is one of the kind.