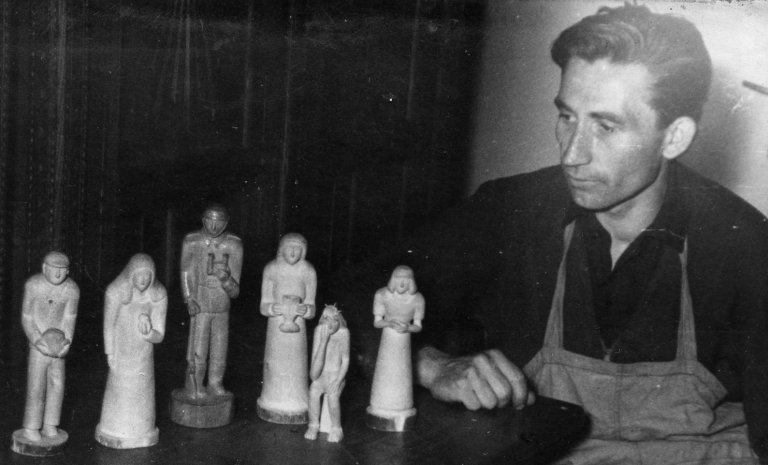 He created a very creative, restless spirit for the preservation of the beautiful art of the Żywiec people. He was born on November 22, 1933 in Wieprz, and died there on August 6, 1979. He began carving at the age of twenty – first small figurines and toys. A main motive of his work was life in the countryside. He made out dozens of village figures with characteristic work tools, numerous genre scenes, and also recreated some folk customs. Among other folk artists he was distinguished by frequent undertaking of feminine and family topics ("Woman and Child", "Motherhood", "Family", "Swineherd women", "Woman with measuring tape", "Village mother with child", "Woman praying", "Woman with a hamper", "Woman with a watering can", "Woman with brews", "Woman with chum" and many others). A separate group were sacred works. He created a gallery of the Pensive, Crucified, Piet, Saints and numerous cribs. He also dealt with the creation of historical figures, memorabilia and jewelry. As a raw material he used linden wood and spruce bark (from which beautiful birds, chapels, stands in genre scenes were created). He worked these materials with simple tools – a penknife, knives, chisels, an ax. He usually left the works in the raw state, occasionally stained, and painted only a few sculptures.

Jan Ficoń belonged to the Folk Artists' Association. In the years 1965–1967 and 1969–1972, he received scholarships from the Ministry of Culture and Arts. He took part in regional and nationwide competitions (taking high places) and in shows organized by the Żywiec group of artists from Different,  he was associated with. His works were presented at collective art exhibitions, in Żywiec, Bielsko-Biała, Środa Śląska, Nysa, Łańcut, Zabrze, Gliwice. They are located in the museums in Żywiec, Bielsko-Biała, Warszawa, Toruń, Nowy Sącz, Łódź and Kraków and in private collections.