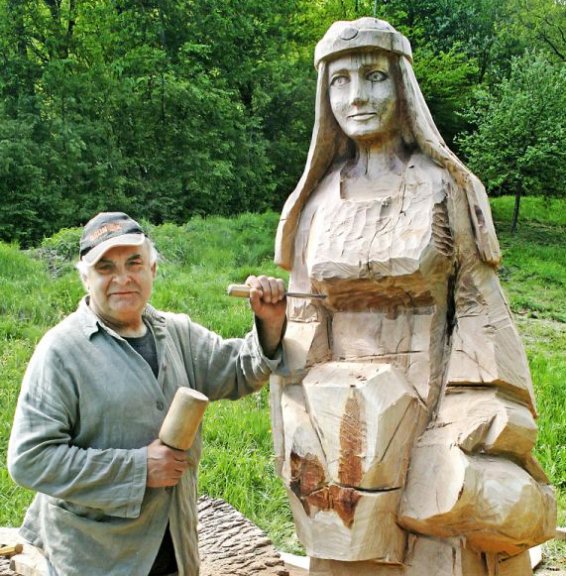 A lover of wood carving, an avid mountain tourist. He was born in 1952 in Hruštín. He had contact with the wood from a small age, his father was a carpenter. And so, as a child, grazing cattle, he carved decorative canes, simple figures (kings, princesses, shepherds) to puppet theater and dummy weapons. In the 1970s, he created figures of women and men in folk costumes, shepherds, rural craftsmen, and robbers. Then came the time for the Holy Family, the passion of Christ, the saints.

Today, Ján Šeliga, a member of the Sculptures' Community, deals mainly with history and folklore. The works – from bas-reliefs, through small figures to the size of a natural sculpture – are made mainly of linden wood, sometimes poplar or sycamore, always with great attention to detail. He treats his sculptures as living beings – he names everyone. The artist protects, nurtures and popularizes not only the authentic folk sculpture, but traditional values of the region. He worked on the construction, created according to the patterns of traditional wooden architecture, cribs in Hruštín, where not only the figures of saints, animals and shepherds are important, but also the presentation of Christmas rituals. In 2010, he began to sculpt in sandstone – mainly characters associated with the Slavic history.

In addition to carving, Ján Šeliga draws and paints – several paintings decorate the walls of his homestead. He also enjoys conducting workshops for children and youth. He has already had a few young followers. Among them is his son Miroslav. He has learned to sculpt at the SOU in Nižná.

Ján Šeliga presented his works (since 1987) at various exhibitions and meetings of sculptors in the country (e.g. in Nižna, Hruštín, Bratislava, Ružomberok, Zuberec, Dolný Kubín, Babín) and abroad (in Poland, the Czech Republic, England, and in Italy and in Hungary). His sculptures can be found in several museums and galleries (e.g. in the Folk Woodcarving Gallery in Babín). He does not sell work, he often offers them to family and friends.