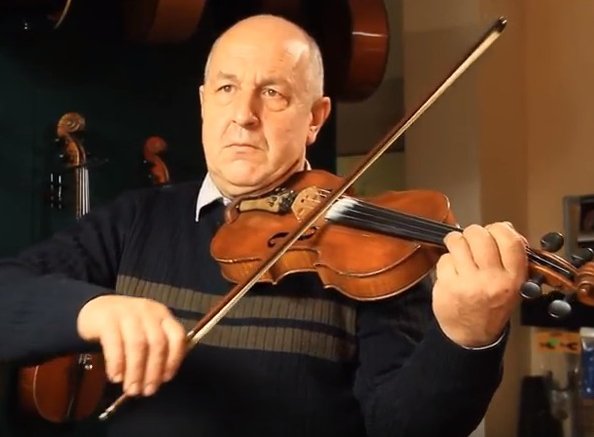 A multi-talented Beskid multi-instrumentalist, expert in folk instruments, educator, passionate about everything that is associated with the Beskidy Mountains. He was born on April 19, 1957 in Żywiec. He lives in Cisiec. His father Jan played on the "heligonka" (kind of accordion), and grandfather Wojciech on the violin, bass and pipes, he also made instruments for grandchildren. Czesław Węglarz studied music education at the University of Silesia in Cieszyn. At that time he founded a band (called Torka), in which he played double bass. After graduation he worked as a music teacher in Kamesznica. He also popularized folk music from Żywiec region among children and youth. In the early 1980s, he decided to recreate the archaic highlander band. He bought bagpipe and learned to play on them himself. Inspired by the memories of his grandmother Ludwika – about the Żywiec highlanders playing on the "gajdy" (kind of bagpipe) – he decided to purchase "gajdy". Because he could not find them anywhere, he made his own, based on those made by Jan Kawulok. And so, he became the second, after the master of Istebna, the builder's "gajdy". As a "gajdosz" (bagpiper) he played in the band with Jerzy Wydra and Jacek Koterba. He also prepared, from the vocal side, a theatrical group Stanisława Białożyt to staging a highlander's wedding from Milówka. At that time, Józef Szczotka received the chants, songs (mainly wedding songs) and melodies written down from the local "gajdosze" (bagpipers) by the violinist, and so he restored them to the folk repertoire.

Czesław Węglarz still conducts music classes at schools in Żywiec. He is a teacher, among others at the State Music School in Żywiec, where he teaches in the folk instruments class the bagpipes, violins, basses and shepherd instruments. He collaborated with the Golec Brothers Foundation, giving lessons on "gajdy" and bagpipes. It is worth to mention that his students win awards and distinctions at the largest festivals and folklore reviews in the following categories: Instrumentalist, Master and student. Czesław Węglarz is also a music instructor of the Regional Song and Dance Ensemble Wierchy from Milówka. He shares his knowledge with other folkloristic groups operating in the Żywiec region: Gronie and Sędzioły from Żywiec, Haśnik from Węgierska Górka, and Grojcowianie from Wieprz. He also runs the Children's Ensemble Małe Cisy at the School Complex in Cisiec, and plays on the unique Ochodzita band with unique pastoral instruments. As an expert and admirer of the musical folklore of Żywiec Highlanders, he is often a jury member of prestigious festivals, competitions and reviews of folk bands.